Home / How To / How To cook noodles

How to boil noodles tutorial– Learn to cook perfect non sticky noodles that are not broken and also not mushy. Perfectly cooked noodles are like plain canvas that can soak up all the delicious sauces or vegetables and turn into a delicious meal.

The texture and shape of cooked noodles can make or break any noodles recipe. Boiling noodles is very similar to cooking pasta. Properly cooked noodles is absolutely non sticky, long, not broken and has a al dente texture just like cooked pasta.

Some of you wrote to me asking for this tutorial and here it is. Here in this post I am sharing how to cook noodles perfectly in an open pot and also a quick set of instructions for boiling noodles in instant pot. Let’s go!

Noodles are a type of dried pasta made from unleavened dough. The dough is rolled thin, cut or extruded into long strips or strings to form noodles. The origin of noodles is from China and it is super popular in Asian cuisine.

Dried noodles are cooked in boiling water with a pinch of salt until soft and used in various recipes. Typically boiled noodles are tossed in sauces or stir fried with vegetables or meat.

In this post I am sharing how to cook dry noodles like hakka noodles, soba noodles and also rice noodles in open pot method. You can use this perfectly cooked noodles to make any noodles recipe like vegetable noodles, schezwan noodles, noodles soup, fried noodles, sesame noodles etc.

Do follow this recipe and you will be able to make perfect and delicious noodles recipes with non sticky noodles.

Which Type Of Noodles Is Best To Use?

There are tons of noodles varieties out there. You should choose the one best suited for the recipe you are making and based on your choice of ingredients of course.

For noodles stir fry you can choose among Chinese noodles like chow mein noodles, egg noodles, soba noodles, udon noodles etc. For pad thai, drunken noodles, pho etc flat rice noodles or pad thai noodles are prefered. If you are soupy noodles or thupka you can again use stir fry noodles or even ramen.

I try to avoid plain flour noodles and go for millet noodles for most of my recipes. I also choose soba noodles made of buckwheat flour or udon noodles made of whole wheat flour. These millet and grain based noodles have a unique flavor and are very hearty in dishes.

Here I have used a millet based noodles for this post. You can use any variety of noodles here expect rice noodles. Most of the rice noodles has to be cooked according to package instructions.

How To Boil Noodles Recipe

Open a pack of 200 grams of noodles and keep it ready. Do not break the noodles.

Let water the come to a rolling boil. Add a big pinch of salt.

Now place the block of noodles into the water carefully. Most of the noodles packet will have cooking time mentioned, so keep a watch. It helps to cook the noodles a minute or two less than what is mentioned to get al dente texture.

Mix again gently. As the water boils, noodles will become soft. Usually this takes around 4-6 minutes.

Now mix very gently so that the noodles do not stick to the bottom of the pan. As the noodles cook, they will begin to float, also check the time mentioned in the pack.

Once they are soft, switch off the flame and immediately drain the cooked noodles in a colander.

Rinse the cooked noodles under running water to prevent further cooking. Now you can add few drops of oil to prevent noodles from drying out. Keep covered until use.

Use a large pot

Always use a very large pot for boiling noodles. They should have enough space to expand while cooking. If you use a small pan, the noodles will clump up and stick to each other while cooking.

Always a pinch of salt while cooking the noodles for making them non sticky.

Do not break the raw noodles

Most of the noodles come as block in the package. Now while cooking, do not break them or crush them. Just place them carefully into the boiling water. They will loosen and elongate as they cook and you will get super long non sticky noodles.

Add Noodles Only After Water Boils

Let the water come to a vigorous rolling boil before adding noodles. If you add raw noodles to water before it boils, noodles becomes hard or dense.

Time Varies With The Type Of Noodles Used

If you thin noodles, cooking time will be less slightly and on the other hand if the noodles are thicker noodles need a few extra minutes.

Do not Cover The Noodles While Boiling

Keep the pan open while the noodles are boiling for better texture and non sticky noodles. If you cover the pan, it will sweat out a lot and become clumpy.

Keep The cooked Noodles Covered Until Use

Once cooked, drain the noodles immediately and rinse under cold water. This helps in maintaining the structure of the noodles.

Add few drops of oil, toss well and keep covered until use to prevent drying out unless your recipe calls for it. For example if you are making fried noodles, avoid tossing oil and dry them thoroughly.

Once you perfectly cooked non sticky noodles, you can use them in the following recipes.

You store the noodles after cooking for 2 days in refrigerator. Add few drops of oil, toss well and keep well covered.

How do you cook dried noodles?

The standard method for cooking dried noodles is to cook them in boiling water with a pinch of salt and oil.
For some varieties of rice noodles you will just have to keep them immersed in hot water until they become soft.

How long do you cook noodles for?

Usually 200 grams of noodles gets done in 4-7 minutes depending on the thickness and variety of noodles. 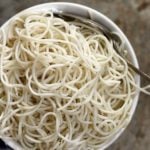 How To Cook Noodles- How To Boil Noodles Perfectly

Prevent your screen from going dark
Harini
How to boil noodles tutorial– Learn to cook perfect non sticky noodles that are not broken and also not mushy. Perfectly cooked noodles are like plain canvas that can soak up all the delicious sauces or vegetables and turn into a delicious meal.
No ratings yet
Print Recipe Pin Recipe
Course Main Course
Cuisine world
Servings 3 servings
Calories 253 kcal

How do you cook dried noodles? The standard method for cooking dried noodles is to cook them in boiling water with a pinch of salt and oil.
For some varieties of rice noodles you will just have to keep them immersed in hot water until they become soft.
How long do you cook noodles for? Usually 200 grams of noodles gets done in 4-7 minutes depending on the thickness and variety of noodles.