Vegan naan recipe- Love naan bread and missing takeaways? Fret not, with this super easy recipe you can make the best ever homemade naan that is fluffy, light with signature chars and super chewy which is also vegan!

This is my tried and tested recipe, like we have been trying and testing this every week :). Yep it is that good! Get that curry simmering for a wonderful comforting dinner!

I am so thrilled to share today’s recipe with you guys. It is the most popular Indian flatbread, the best Indian naan bread.

Where Did Naan Originate?

Naan and kulcha are basically Persian breads popularized by Mughals. In the olden days yeast was very expensive and this bread was reserved for royals and nizams

Once yeast became common, naan also gained popularity. Over the time it is has become a very popular and most sought after bread to soak up rich Indian curries.

Vegan naan is a delicious variation of popular Indian flatbread naan made with flour, yeast, salt and brushed with butter.

In this vegan version we are using dairy free butter and milk to make the recipe.

I have a classic butter naan recipes shared in the blog and many of you asked for this vegan version.

So here you go, a delicious plant based naan recipe for making chewy, soft with crispy charred edges naans at home. No special equipment like tandoor or grill required.

We love naan bread at home and I make it at home often. While mostly I make it with whole wheat flour, sometimes you need that chewy taste and real texture that only pain flour can yield.

Yep, if you want to recreate the exact naan bread  recipe like your favorite restaurant or takeaway use plain flour + yeast.

Agreed that there are various recipes around the web as well as in my blog for making this bread without yeast, with whole wheat flour and many other variations. But they are all substitutes and only as good they can be.

If you want to get the real taste of this bread let the plain flour and yeast combine and do their magic. It is totally worth indulging once in a while.

This is a vegan naan bread recipe. Recently I had picked up a pack of vegan butter from my local organic store and it worked great for this Indian naan recipe.

You can simply use regular butter too. For a more wonderful flavor you can also use garlic butter or any herbed butter. This homemade vegan naan recipe Is

Exactly or even better than takeaways and restaurants

So easy to make, no need to fret yeast, just read my tips

economical and costs a fraction of what you would spend in restaurants.

To make this delicious bread at home you need fairly simple and less ingredients. Naan is a leavened flatbread from Indian subcontinent. It is known as naan bread in United States.

The traditional naan recipe is leavened with yeast and cooked in a tandoor. Most of us do not have access to tandoor or we are going to cook this stove top in a sturdy pan in highest heat possible.

I have shown two methods to cook this bread. All you need are a good cast iron flat pan that would withstand high heat and a handheld grill plate that I have used.

If you do not have that plate you can directly cook the naan on flame using a tong and just follow my another method.

Usually the pan itself will be flipped to cook the naan over directly flame as in my tandoori roti recipe, but with heavy cast iron pan that is not possible.

For making naan dough recipe you will need the following ingredients.

Plain flour or all purpose flour makes the best soft, chewy and light naan. While you can use whole wheat flour too, it will make the naan a bot dense though.

Yeast- Use finest quality yeast you have for best results. I prefer to use rapid rise yeast compared to active dry yeast for this recipe.

Salt- add to taste, you can also add kosher salt.

Water– To knead the dough. Use warm water for best results.

Yogurt– This is an optional ingredient and it makes the naan very soft. Just add 2 tablespoons and not more than that. You can use cashew yogurt, almond yogurt or soy yogurt.

Oil- Add few drops of oil brings the dough together and makes the naan soft. Use olive oil or any vegetable oil.

Vegan butter– for brushing the cooked naan before naan. Melt the butter and use.

The basic dough is similar to any yeast bread dough. You mix everything well, add required water and knead well for 8-10 minutes. Also You can easily use a stand mixer with dough hook.

You basically need just flour, salt, sugar, yeast oil and water for dough. All the other ingredients like butter or yogurt are enrichments only.

The toppings added are what make naan more interesting. You can by all means serve plain naan smeared with butter, but why go plain when you can adorn a bit right?

Some of my favorite naan toppings are

carom seeds, just a pinch though

Combine plain flour, yeast, sugar and salt in a large mixing bowl. Use a measuring cup or kitchen scale for precise measurements.

Add 1/2 cup to 3/4 cup warm water gradually and knead into soft and supple dough. The dough will be initially sticky, do not add too much more flour. Cover with a tea towel.

Let the dough rest at room temperature until it doubles in volume. Takes from 60-90 minutes. The dough should be soft and fluffy

Once the dough has raised, punch it back gently and knead again for a minute. Make sure the dough is soft fluffy and light.

place a ball on a slightly floured surface.

Roll into a oval of around 1/3 inch thickness using a rolling pin. The dough will be similar to pizza dough, you can simply stretch the dough ball with hand from all sides and make an oval.

How to cook naan bread

While you are rolling the dough, heat a cast iron skillet or pan for 3-4 minutes. Maintain high flame. You will need a skillet with handle.

After rolling the dough apply water with a pastry brush generously on one side. Sprinkle your desired toppings. Press gently.

Now place the watered side down on the hot pan. Cook for 30-40 seconds.

Now to cook the other side, place a grill stand like this over flame.

Gently remove the naan from the and place on the grill stand, uncooked side facing flame. Cook until it puffs and chars, takes around 30-4o seconds.

Place the cooked naan on a plate and brush with melted vegan butter.

If you don’t have grill stand you can just cook the flatbread on the pan or tava itself.  Just cook from both sides until it chars and puffs up a bit.

It all starts with the yeast– Use good quality yeast that is fresh and active for this recipe. Previously I have used active dry yeast which needs some proofing, but these days I use instant dry yeast.

These granules are more fine and they can be directly mixed with the flour.

Try to get this type of yeast as it is more easy to work with. Though many brands say yeast last for a long time try to purchase fresh ones and in small quantities. Store yeast in freezer to keep it fresh.

Most of the times, leavening a dough with yeast is dependent on temperature. In warmer weather your dough will leaven fast and in cold weather it will take more time.

So use the timings given in any recipe only as guideline and allow some time for yeast to work.

Be precise with the measurements– Please weigh the flours and liquids using a kitchen scale or measuring cup especially you are beginner. Any change in quantity of flour will change the texture of naan.

Use fine quality flour for best texture. Use fresh flour that is not rancid. You can also use bread flour if you like.

Use a very good quality cast iron pan– We need a pan that will withstand high heat. I like to use my flat pan that I use for dosa, paratha recipes. You can also use any heavy frying pan or cast iron skillet skillet with handle

To achieve this at home we need to create a bit of steam in the pan for the bread to cook. After rolling the dough into naan, apply water generously on one side and place the watered side facing down on a heated flat pan.

Make sure the flame is highest. The steam from water will lend a wonderful smoky flavor.

There are so many ways you can serve and enjoy this bread.

This flatbread freezes beautifully and stays good for months in freeze.

Prepare the dough, let it rise, divide and roll out into naans. Stack them alternating between a piece of parchment and a flatbread. Store in a freezer bag.

At the time of making naan, remove the required numbers and cook as mentioned in the recipe.

You can also freeze any leftover cooked naan in the same way. To serve, remove from freezer and war in low heat.

Can I use whole wheat instead of all purpose flour?

Yes, just increase water by 2-3 tablespoons. You can also use a plain and wheat flour blend.

How to make soft naan?

To make super soft naan first of all you can add 1/4 cup milk (dairy or vegan) along with water. Next make sure to knead the dough really well.

Can I make this recipe without yeast?

Can we use coconut milk or coconut cream in this recipe?

I would not recommend coconut milk here as the flavor will be prominent.

What Can I add instead of sugar in this recipe?

Maple syrup can be added

How to make gluten free naan? Will chickpea flour work?

Use any of your favorite gluten free flour blend used for making breads. Chickpea flour is not suitable for this recipe.

Which vegan yogurt is good for making naan?

I hope you will try this easy vegan naan bread recipe and enjoy as much as we did. Do snap a pic and share on Instagram with hashtag #cookclickndevou and please give a star rating ★ in the recipe card below. Follow us on Pinterest , Instagram, Facebook   for more recipes and ideas. 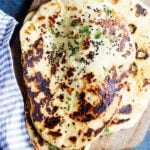