This Indian homemade butter naan recipe yields the best restaurant style butter naan, that is soft with flaky edges and feather light. Just perfect homemade naan bread to soak up your curries and gravies. This naan bread is fluffy, light, easy and truly delicious. Here is how to make best butter naan at home! 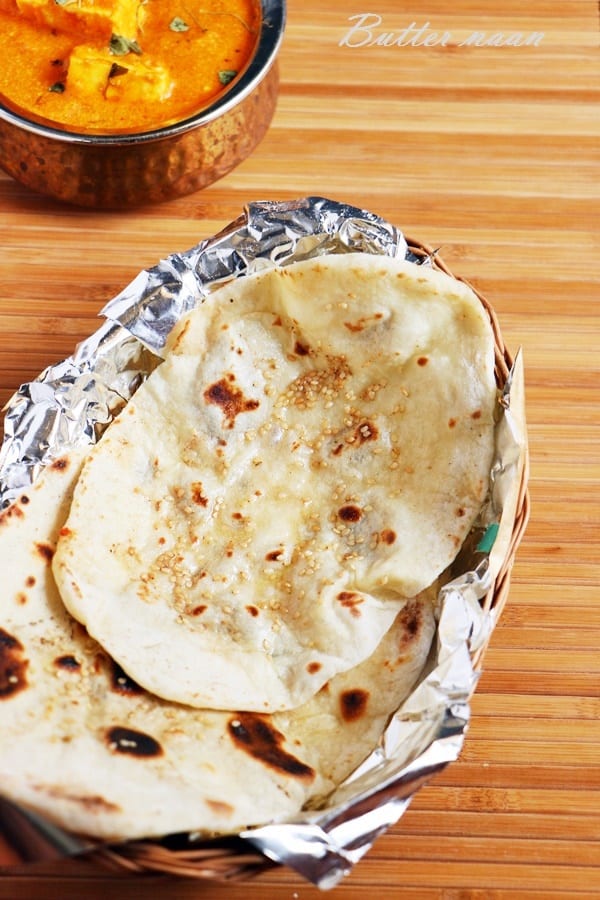 What is your go to meal choice when you visit a north Indian restaurant or dhaba? Most of use like to order a delicious flatbread to mop our curries and gravies. Though there are so many flatbread options that Indian cuisine as to offer, this butter naan is uber famous and very delicious too.

Most of us like a warm piece of soft naan bread slathered with butter to go with spinach chickpea curry, paneer tikka masala, paneer butter masala or palak paneer. Did you know making butter naan recipe at home is very easy and you do not need any special equipment?

Naan bread is super popular across the globe too. A well made garlic or butter naan with a good curry is most loved in the US and other countries. It is one of the most preferred Indian food among westerners.

There are so many varieties of naan like dhaba naan, cheese naan, garlic naan, stuffed ones but this butter naan is the most basic one. If you prefer you can also make whole wheat naan bread.

This butter naan bread is my tried and tested recipe that I have been making for years. It is a recipe that never fails. You will get tasty, fluffy and light naan that does not have an yeasty flavor or taste every single time.

So if you are very fond of naan bread from restaurant or takeouts, give it a miss and try out this homemade naan bread. You will be amazed 🙂

This Homemade Naan Is

Vegetarian and can be made vegan

Goes well with all delicious curries

What Is Butter Naan ?

Naan is a leavened Indian flatbread that is baked in clay ovens (tandoor) in highest temperatures. You can leaven a naan with yeast or baking powder and curd. Usually restaurant style soft butter naans are leavened with yeast only.

Naan is India’s most popular flat bread that served in all restaurants and especially dhabas. Butter naan recipe is usually prepared in tandoor (clay oven) in high heat to produce the signature chars here and there. Here I am sharing an easy recipe for butter naan on tava.

As most of us do not have access to tandoor or clay oven we can easily make this butter naan on tava or in oven. The smoky tandoor effect can be achieved at home cooking on direct flame or broiling for few minutes in oven. This recipe yields very soft naan bread that does not chewy or hard on cooling.

This butter naan is always cooked in tandoor (clay oven) in Indian restaurants.  As opposite to restaurant naan, this homemade naan does not turn hard or chewy on cooling.

While making butter naan recipe at home is extremely easy yet there are tips and tricks that will help you make best butter naan.

The yeast you use can make or break your recipe. Use the best quality yeast you could, not only for this recipe but for all the recipes that call for yeast. I have made this recipe with active dry yeast which required proofing. If you have instant dry yeast you can add it directly to the dough.

Use filtered lukewarm water around 110 f for proofing the yeast.

Mild and curd lends a soft texture to this flat bread and vegans can simply use some warm water in place of it.

How To Make This Recipe Vegan?

Can I Make Butter Naan In Oven?

Yes, you can make this recipe in an oven easily. Here are the steps. prepare the dough as mentioned below. Preheat oven at 250 C / 450 F (or the maximum temperature of your oven) for 20 minutes. Also preheat the cast iron skillet or pizza stone or baking tray. Place the rolled naan on the baking tray. The watered side down as in making on stove top. Broil for 4 minutes. Remove and serve.

How To Make Butter Naan Without Yeast?

To make naan without yeast, just add 1.5 teaspoons baking powder instead of yeast and add just to the flour mixture and knead the dough.

Tips For Making This Recipe Perfectly

It is best to serve butter naan immediately, else stack the naan and cover them loosely with a cotton napkin to retain softness and warmth.

Make More With Your Naan Bread

Sometimes I cut the leftover naan bread into wedges and toast in oven until crispy. Tastes great with cheese spread.

You can make the most of this naan bread well ahead and freeze. Freezing naan bread is basically like freezing uncooked tortilla.

Just make the dough, let it proof and roll the naan as mentioned and roll out all the naans.

Now make a stack of these rolled naan dough alternating each dough roll with a parchment paper. Place in freezer safe bags and seal. Keeps well for minimum three months.

When required, remove as many as you need from the freezer and pop in the oven or cook on stove top.

How To Make Butter Naan Recipe

First of all take 1/3 cup lukewarm water in a bowl. Sprinkle 1/2 tablespoon active dry yeast over the water. Add sugar and keep the bowl undisturbed for 10 minutes. 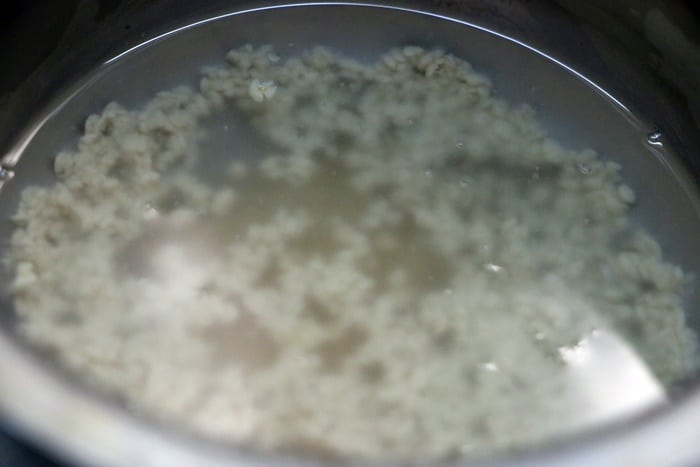 The yeast will become active and turn frothy. 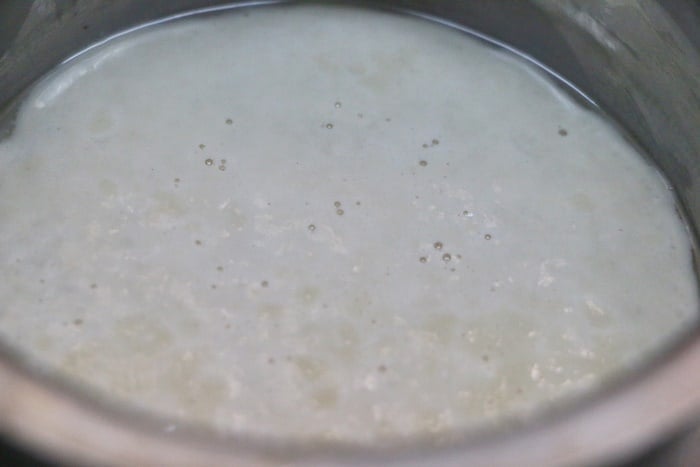 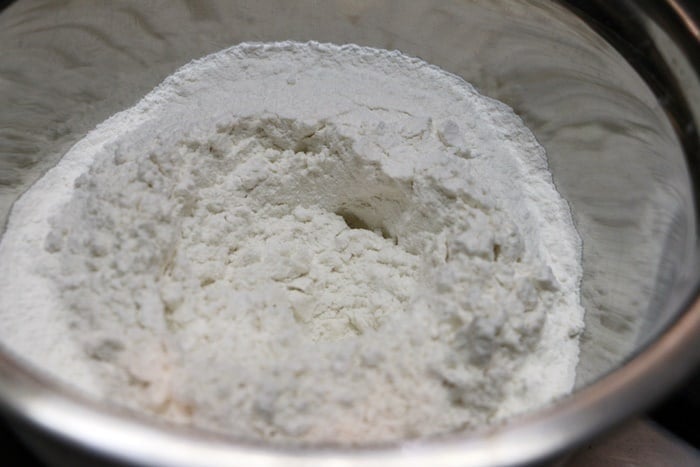 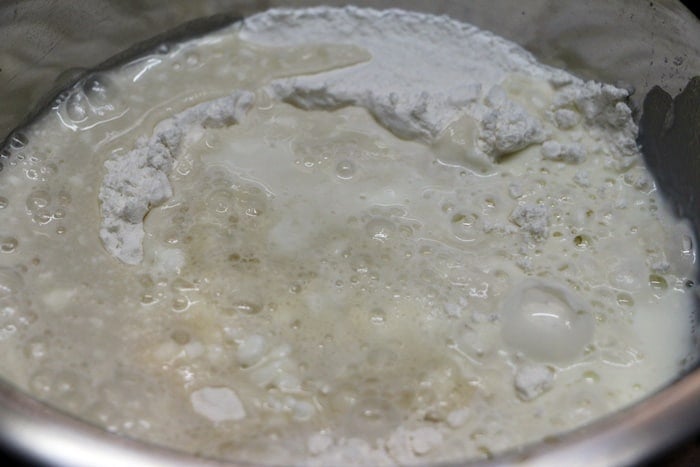 Add salt and mix well. Add water little by little and knead to a soft dough. The dough will little bit sticky. You can add flour to make kneading easy. 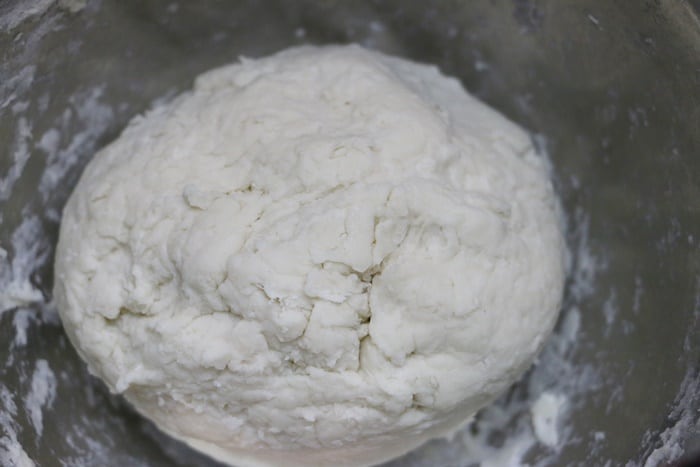 Let the dough rest for 1.5 hours till the volume doubles up. 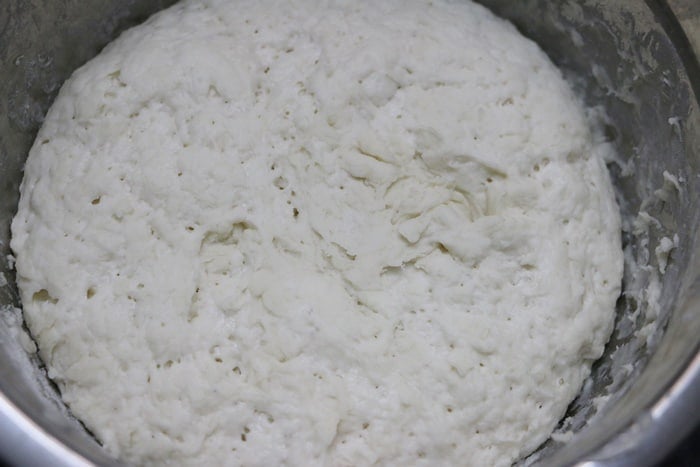 Divide the raised dough into 7-8 equal sized portions. Flatten a portion and roll into a tear shaped naan. Brush one side of the naan with some water. 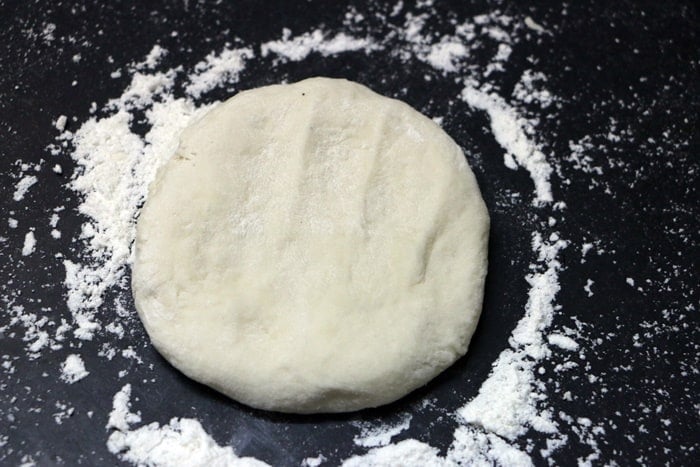 Heat a tava with handle. place the naan on the tava, the watered side should touch the tava. cook for just 10 seconds. 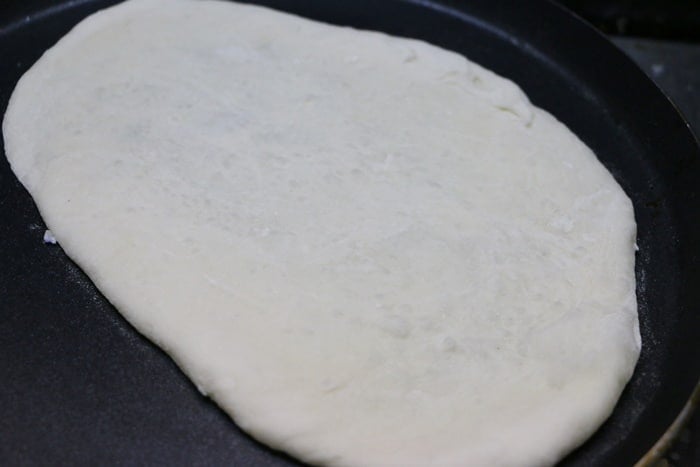 Now remove the tava from flame and turn the tava upside down so that the other side of the naan is directly cooked on flame. 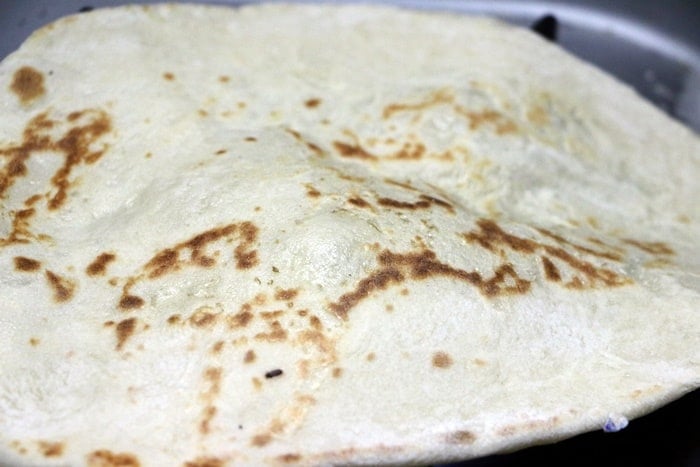 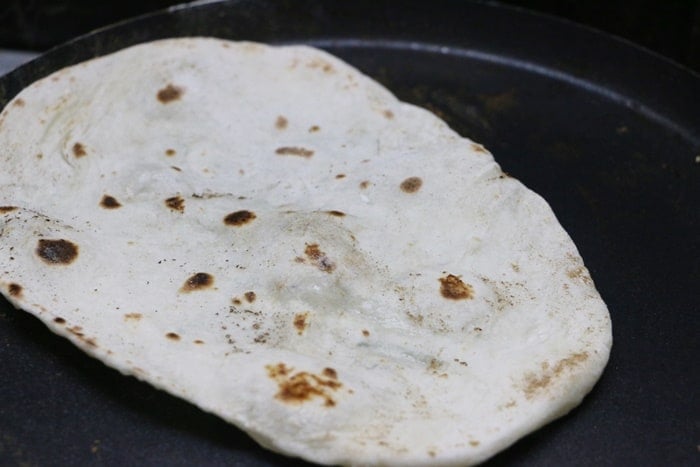 Apply some melted butter on both sides and spread some esame seeds. Press gently with spatula. Prepare all the butter naan same way.

If not serving immediately, stack the naans and cover loosely with a towel.

Serve butter naan with any spicy gravy of your choice. 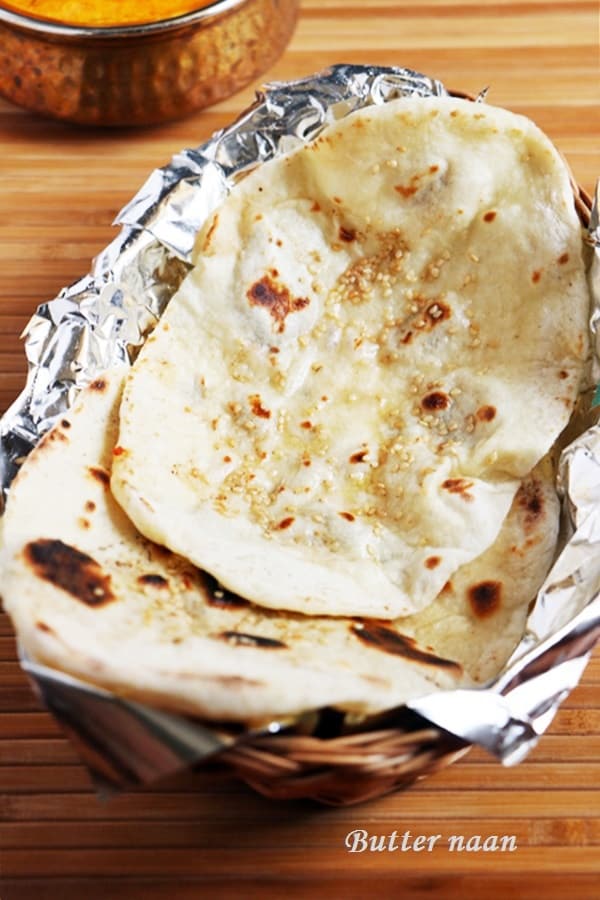 Are you making this homemade naan recipe? I would love to see a snap of your creation too. Do snap a pic and share on Instagram with hashtag #cookclickndevou and please give a star rating ★ in the recipe card below. Follow us on Pinterest , Instagram, Facebook   for more recipes and ideas. 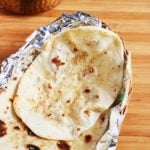 To make dough for butter naan

1.You can add 1 tablespoon butter to the dough instead of milk.
2.Instead of sesame seeds you can add nigella seeds too.
3.You can cook butter naan on tava itself instead of cooking on flame.